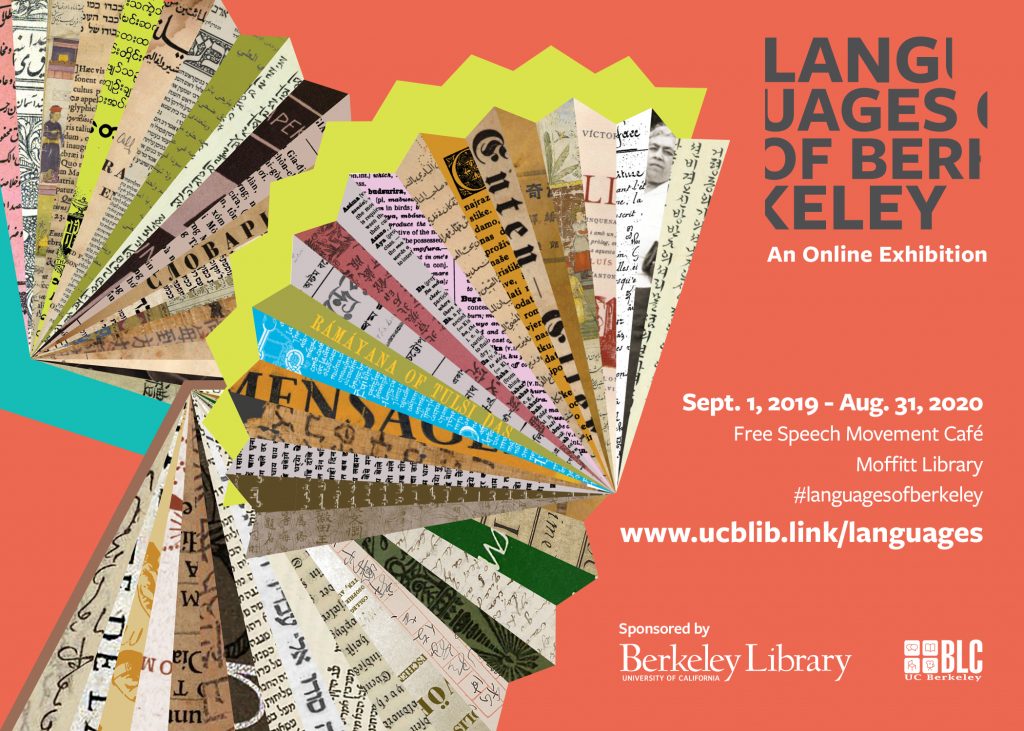 We are pleased to launch this online library exhibition that celebrates the magnificent diversity of languages that advance research, teaching, and learning at the University of California, Berkeley. It is the point of embarkation for an exciting sequential exhibit that will build on one post per week, showcasing an array of digitized works in the original language chosen by those who work with these languages on a daily basis — librarians, professors, lecturers, staff, and students. Many of these early-published works are now in the public domain and are open to the world to read and share without restriction.

Since its founding in 1868, students and faculty at UC Berkeley have concerned themselves with a breathtaking range of languages. In support of teaching and research, the University Library, which collects and preserves materials in all languages, now boasts a collection of nearly thirteen million volumes. It is among the largest academic libraries in the U.S. with more than one third of its print resources in more than 500 non-English languages.

The Languages of Berkeley as defined by this exhibition are the fifty nine modern and ancient languages that are currently taught across fourteen departments on campus plus a few more languages that contributors wished to include. Linking the languages and works, the online exhibit will reach completion in the Spring of 2020 and then be archived with other online library exhibits. From September 2019 to August 2020, a physical companion exhibition will be installed in Moffitt Library’s Free Speech Movement Café, providing a prominent physical interstice with the online instance. It is our hope that it nourishes and inspires intellectual curiosity and creativity and an appreciation for learning a foreign language.

This exhibition is made possible with the contributions of all listed below and through the support of the UC Berkeley Library. It is co-sponsored by the Berkeley Language Center (BLC). We hope you enjoy!

The Languages of Berkeley: An Online Exhibition by individual contributors of this online library exhibition is licensed under a Creative Commons Attribution-NonCommercial 4.0 International License, except where otherwise noted.