Many of the principles and methods for resource description were developed for describing text resources in physical formats. Those principles have had to evolve to deal with different types of resources that people want to describe and organize, from paintings and statues to MP3s, JPEGs, and MPEGs.

Some descriptions for non-text resources are text-based, and are most often assigned by people. Other descriptions are in non-text formats are extracted algorithmically from the content of the non-text resource. These latter content-based resource descriptions capture intrinsic technical properties and in some domains are able to describe aboutness with some accuracy, thanks to breakthroughs in machine learning.

The problems associated with describing multimedia resources are not all new. Museum curators have been grappling with them since they first started to collect, store, and describe artifacts hundreds of years ago. Many artifacts may represent the same work (think about shards of pottery that may once have been part of the same vase). The materials and forms do not convey semantics on their own. Without additional research and description, we know nothing about the vase; it does not come with any sort of title page or tag that connects it with a 9th-century Mayan settlement. Since museums can acquire large batches of artifacts all at once, they have to make decisions about which resources they can afford to describe and how much they can describe them.

German art historian Erwin Panofsky first codified one approach to these problems of description. In his classic Studies in Iconology, he defined three levels of description that can be applied to an artistic work or museum artifact. Figure: Contrasting Descriptions for a Work of Art. contrasts these three levels in the descriptions of a marble statue. It also shows the striking differences between the EXIF description in a digital photo of the statue and those created by people.[1]

Professionals who create descriptions of museum and artistic resources, architecture and other cultural works typically use the VRA Core from the Library of Congress, or the Getty Trust Categories for the Description of Works of Art(CDWA), a massive controlled vocabulary with 532 categories and subcategories. A CDWA-Lite has been developed to create a very small subset for use by non-specialists.[2]

Contrasting Descriptions for a Work of Art 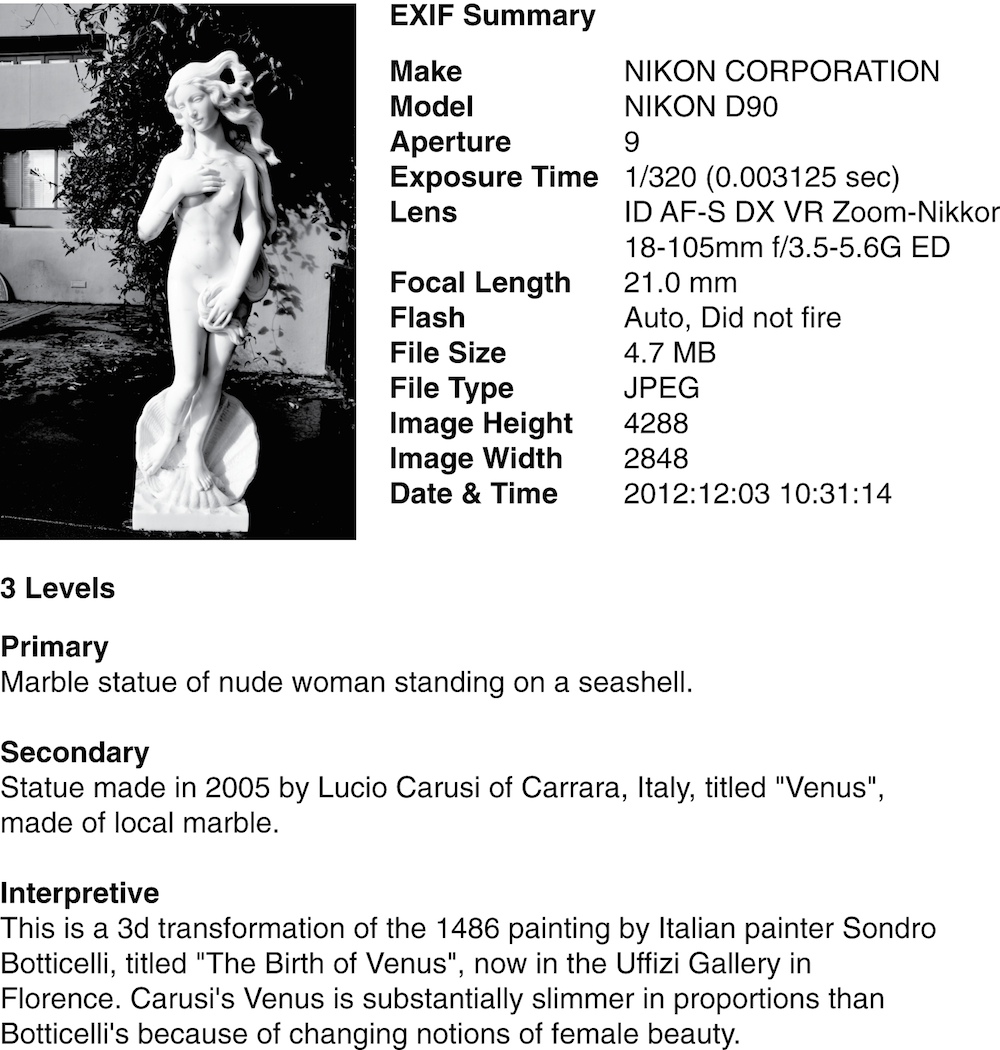 (Photo by R. Glushko. The statue, titled “Venus,” was made by Lucio Carusi, of Carrara, Italy, and is currently part of a private collection.)

Digital cameras, including those in cell phones, take millions of photos each day. Unlike the images in museums and galleries, most of these images receive few descriptions beyond those created by the device that made them. Nevertheless, a great many of them end up with some limited descriptions in Facebook, Instagram, Flickr, Picasa, DeviantArt, or others of the numerous places where people share images, or in professional image applications like Light Room. All of these sites provide some facilities for users to assign tags to images or arrange them in named groups.

Many different computational approaches have been used to describe or classify images. One approach uses the visual signature of an image extracted from low-level features like color, shape, texture, and luminosity, which are then used to distinguish significant regions and objects. Image similarity is computed to create categories of images that contain the same kinds of colors, objects, or settings, which makes it easy to find duplicate or modified images.[3]

For computers to identify specific objects or people in images, it is logically necessary to train them with images that are already identified. In 2005 Luis van Ahn devised a clever way to collect large amounts of labeled images with a web-based game called ESP that randomly paired people to suggest labels or tags for an image. The obvious choices were removed from contention, so a photo of a bird against a blue sky might already strike “bird” and “sky” from the set of acceptable words, leaving users to suggest words such as “flying” and “cloudless.” Van Ahn also invented the reCAPTCHA technique that presents images of text from old books being digitized, which improves the accuracy of the digitization while verifying that the user of a web site is a person and not a robot program.[4]

However, if short text descriptions or low-level image properties are the only features available to train an image, otherwise irrelevant variations in the position, orientation, or illumination of objects in images will make it very difficult to distinguish objects that look similar, like a white wolf and the wolf-like white dog called a Samoyed. This problem can be addressed by using deep neural networks, which exploit the idea that low-level image features can be combined into many layers of higher-level ones; edges combine to form motifs or patterns, patterns combine to form parts of familiar objects, and parts combine to form complete objects. This hierarchical composition enables the highest-level representations to become insensitive to the lower-level variations that plague the other approaches.

In 2012, when deep learning techniques were applied to a dataset of about a million images that contained a thousand different object categories, they reduced the error rate by half. This spectacular breakthrough, and the fact that the deep learning techniques that derive layers of features from the input data are completely general, rapidly caused deep learning to be applied to many other domains with high-dimensional data. Facebook uses deep learning to identify people in photos, Google uses it for speech recognition and language translation, and rapid captioning for images and video are on the horizon. Wearable computers might use it to layer useful information onto people’s views of the world, creating real-time augmented reality.[5]

Describing music presents challenges quite different from those involved in describing texts or images. Poems and paintings are tangible things that we can look at and contemplate, while the aural nature of music means that it is a fleeting phenomenon that can only be experienced in the performative moment. Even musical scores and recordings, while as much tangible things as paintings and poems, are merely containers that hold the potential for musical experience and not the music itself. Most contemporary popular music is in the form of songs, in which texts are set to a melody and supported by instrumental harmonies. If we want to categorize or describe such music by its lyrical content, we can still rely on methods for describing texts. But if we want to describe the music itself, we need to take a somewhat different approach.

Several people and companies working in multimedia have explored different processes for how songs are described. On the heavily technological side, software applications such as Shazam and Midomi can create a content-based audio fingerprint from a snippet of music. Audio fingerprinting renders a digital description of a piece of music, which a computer can then interpret and compare to other digital descriptions in a library.[6]

On the face of it, contemporary music streaming services represent the apex of music classification and description. Pandora, for example, employs trained musicologists to listen to the music and then categorize the genres and musical materials according to a highly controlled musical vocabulary. The resulting algorithm, the “Music Genome,” can essentially learn to define a listener’s musical tastes by means of this musical tagging, and can then use that information to suggest other music with similar characteristics.[7]

But musicians have been thinking about how to describe music for centuries, and while the Music Genome certainly brims with complexity, it pales in comparison to the sophistication of the much older “pen-and-paper” methods from which it derives. Ethnomusicology (loosely defined as the study of global musical practices in their social contexts) has arguably made greater strides towards comprehensive descriptions of musical resources than any other field of musicological study. Since the late 19th century, ethnomusicologists have created complex methods of notation and stylistic taxonomies to capture and categorize the music of both Western and non-Western cultures.

Hungarian composer and scholar Béla Bartók collected and transcribed thousands of Eastern European folk songs to which he applied a complex classification system to group them into “families” derived from melodic archetypes. More recently, American ethnomusicologist Alan Lomax’s Cantometrics project classified songs collected from around the word according to 37 style factors in an effort to create a common controlled vocabulary that would facilitate cross-cultural comparison and analysis.[8]

A DJ Describes and Organizes Music

Casual music fans might describe their music using the names of the songs or performers and might organize it according to genres like “Pop,” “Rock,” or “Classical.” A professional DJ, however, emphasizes different properties, especially the beats per minute of the music.

This annotated photo shows a portion of the music collection of noted DJ “Kid Kameleon” (http://kidkameleon.com/ ).

(Photo and annotation by Matt Earp. Used with permission.)

On a more granular level, musicians are endlessly innovative in finding ways to categorize, describe, and analyze not simply large-scale musical genres, but the notes themselves. In the accompanying photo showing the record collection of professional DJ “Kid Kameleon,” we see that the records are arranged not simply by genre, but also by beats-per-minute (BPM). For Kid Kameleon, these records represent the resources of his musical creative process, and arranging them by BPM allows him to pull exactly the correct musical material he needs to keep the music flowing during a performance. His classification system is therefore a taxonomy that moves from the broad strokes of genre down to the fine grains of specific arrangements of notes and rhythms. This photo is not simply a picture of a record collection: it is a visual representation of an artist’s creative process.[9]

Video is yet another resource domain where work to create resource descriptions to make search more effective is ongoing. Video analytics techniques can segment a video into shorter clips described according to their color, direction of motion, size of objects, and other characteristics. Identifying anomalous events and faces of people in video has obvious applications in security and surveillance.[10] Identifying specific content details about a video currently takes a significant amount of human intervention, though it is possible that image signature-matching algorithms will take over in the future because they would enable automated ad placement in videos and television.[11]