Overview. A neuroscience lab is doing Parkinson’s disease research in which they do experiments with rats. They use different types of rats, surgeries, and drugs for experiments and have to keep track of all this information for data analysis, publications, and lab inspectors.

The existing organizing system was developed before personal computers were prevalent and has slowly evolved over time. However, much of the underlying structure of the system still has its roots in pre-computer concepts. In order to update the system to incorporate more modern technologies what are the changes to the resources, their descriptions, and the systems structure that need to be made? 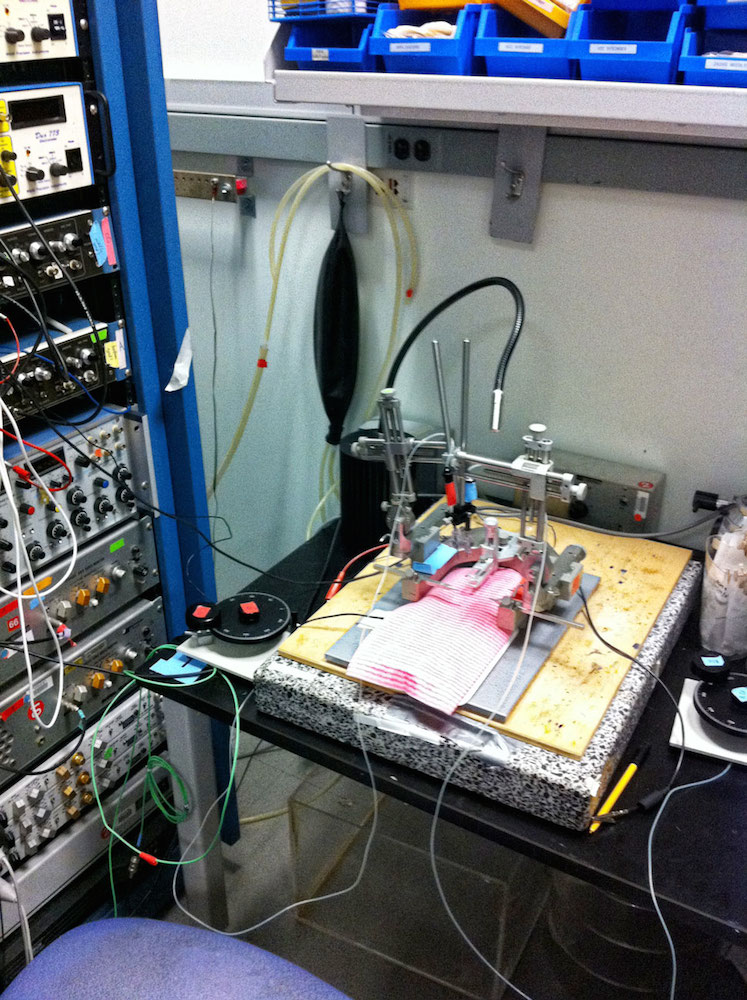 Physical resources in the author’s lab are arranged to facilitate the precise accuracy of interactions required in medical research. In this photo, an array of amplifiers and filters for processing and recording rats’ brainwave signals (left) is installed in a vertical rack that can be located close to the equipment used to perform surgeries.

One such new resource is surgery techniques. Surgery techniques have historically been passed down by the master apprentice method and information was largely tacit knowledge that was held by the researchers performing the surgeries and not explicitly in the system. This was done because it is inherently difficult to store the intricacies of surgery in text and even more difficult for a new researcher to learn how to perform the surgery from textual information. The ability to store and annotate multimedia changes this however. It is now possible to make instructional videos for each type of surgery, add resource descriptions to the video file and store it in the organizing system.

There is also a resource that is treated as one resource through its entire lifetime when it may actually be two. When rats are originally brought into the organizing system they are treated as a manifestation of the rat resource type. Meaning the rats are interchangeable, you can use any rat from that group in your surgery. Once the surgery has been performed the rat is modified into a new resource instance. The specific rat the surgery was performed on now has a new set of resource descriptions.

Why is it being organized? Is the main purpose of the organization system to make sure the correct rats are used in each different experiment? Or is it to make sure the records are kept up to date for the lab inspectors? It could also be making data analysis and paper writing more efficient. These decisions will affect how many different types of resource descriptions are required and the granularity needed for those descriptions.

This system is just one of many organizing systems within a lab so deciding the scope and interactions it will have with the other organizing systems is very important. One important decision is if the system will support the training of new members of the lab or not. Having resources such as video recording of surgeries and experiments could enable teaching interactions for new researchers. But there are many other aspects of training a new researcher must go through, should these also be included in the organizing system? If so, it would make the system much more complex and expand the scope of the organizing system outside of surgeries and experiments but would keep all of the teaching resource in one system.

Another option would be to have a separate organizing system that is responsible for training material which is able to interact with the multimedia in the system that are relevant to training. This does not expand the scope of the system but would make the maintenance of it more difficult. Each time a surgery technique or experiment is changed two systems would have to be updated to take the changes into account.

How much is it being organized? The system is accessed by many types of users, each requiring a different type of interaction. The researchers need to search for the correct rat and surgery technique. The lab inspector needs to check for drug logs and make sure all the surgery methods and equipment are up to date. The principal investigator needs to see an overview of progress on projects.

Currently the system is organized in hierarchical categories where the top-level categories are surgery and experiments. This organization makes it easy to retrieve specific resources. However, the interactions normally performed with the system use resources from both sub-trees, which makes the hierarchical approach less than optimal.

A faceted classification approach could work well to enable these interactions. The facets would incorporate the original categories of surgery and experiments but also add facets for each common type of interaction. In this case different resource descriptions of the same resource will often be classified into different facets. These resource descriptions will often act as resources themselves. For example, a lab inspector is interested in retrieving the expiration date and times a drug was used in surgery, not the drug itself.

When is it being organized? In a neuroscience lab resource descriptions are often lost if they are not recorded at the time they are measured. For example, if a rat is weighed to calculate the correct dosage of a drug, both the dosage and the weight should be entered into the system. If the weight is not entered at the time of measurement it would be impossible to weigh the rat later and get the same result (as the rat changes weight over time.) This is a common problem, so as a rule all resources and descriptions should be entered into the system at the time they are acquired.

How or by whom is it being organized? The researchers working in the lab do all of the organizing. They are the ones creating new resources, descriptions and have the most knowledge about the resources and how they relate to each other.

Other considerations. Changing the system and entering all of the data at the time of measurement will initially cause more work for the researchers but will result in more accuracy for the interactions supported by the system and less retrieval work during data analysis and paper writing.