Overview. The Honolulu Rail Transit Project is an urban rail rapid transit system under construction in Honolulu on the island of O’ahu, Hawaii. Honolulu’s notoriously bad traffic has plagued locals and tourists for decades, and for almost as long, proposals to address the traffic problems and pay for the solution have been very contentious and political. Construction began in 2011 and is expected to finish in 2019, but delays have been frequent.

What resources are being used? The new railway transit system under construction in O’ahu will run along the southwest region of the island spanning a total of 20 miles, from East Kapolei to Downtown Honolulu with a total of 21 stops strategically placed throughout. There are a number of ways in which one could scope this project. What are the cultural and political limitations? What are the environmental effects and resources that will be indirectly affected? What are the topographic constraints of a railway system in Hawaii? In terms of the scope of my analysis, however, the people—namely the things the organizing system is intended for—are the primary resources. The principle guiding the organizing system is to reduce traffic and make the traveling experience more efficient as a whole. 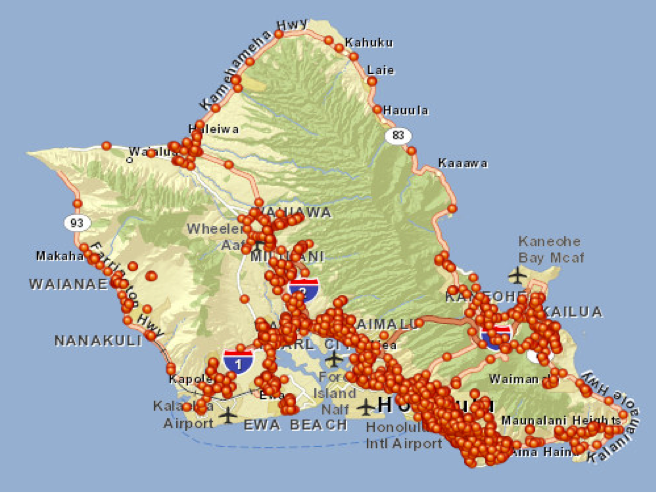 O’ahu traffic is usually congested, especially in and around Honolulu on the south and southeast sides of the island

Why are the resources organized? The guiding principle behind the organizing system of a rail transit system is to reduce traffic and make commuting more efficient. According to the Department of Business, Economic Development and Tourism, the amount of traffic on almost every major highway on O’ahu has increased from 2012-2014. Moreover, the dearth of job creation on other parts of the island, namely the west side, has focused traffic into and out of downtown Honolulu, as shown in the first map.

This skewed traffic pattern, limited real estate, and inflexible road infrastructure has necessitated an above-ground railway system linking the west side of O’ahu with the burgeoning downtown area of Honolulu. This new organizing system seeks to rebalance the traffic system by reorganizing its resources, that is, by taking drivers and bus commuters off the road and onto the rail. O’ahu has only three major freeways, the H1, H2, and H3. The freeway H2 bottlenecks from the west into H1. Drivers and bus commuters are organized in such a way that peak hours of traffic are unavoidable. The new transit will conceivably provide an additional layer of organization to the currently

How much are the resources organized? There are 21 planned stations that run along the 20-mile span of track. The train stations are arranged to serve as many people as possible by concentrating them in the most densely populated areas. 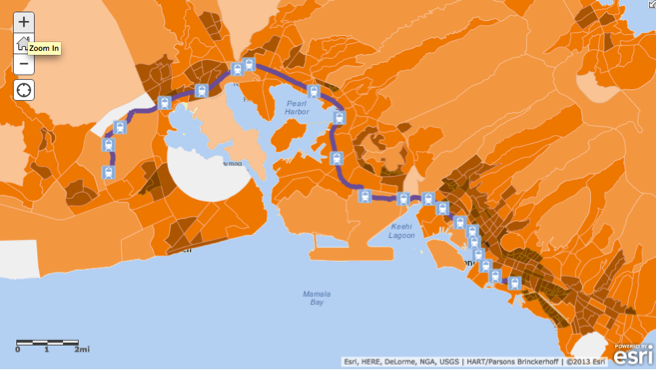 Population in Honolulu area is highly concentrated in lowland areas.

Darker areas represent high-density tracts while lighter areas represent low-density tracts. The densely-populated stretch from Keahi Lagoon to Honolulu Downtown, also has the highest density of traffic. It makes sense that this portion of the rail system constitutes almost half the number of total stops in just a quarter of the total mileage. 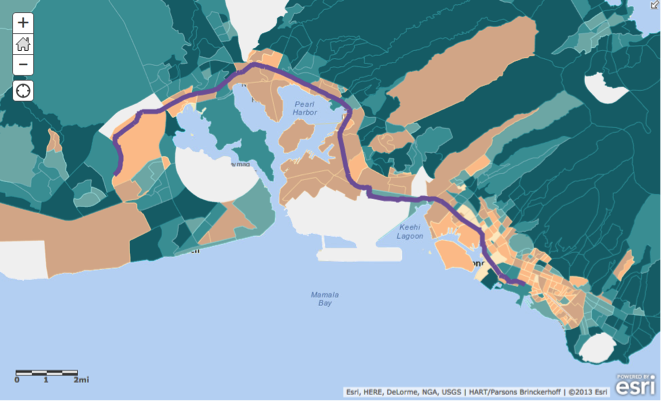 Household income is lowest in the most densely populated areas.

When are the resources organized? As with any construction project of this magnitude, the organizing system was planned in detail before construction—down to the number of pillars, the amount of concrete, the imported steel for rail cars, etc. However, after construction excavation revealed ancient burial sites, the Native Hawaiian community demanded many changes to the project. The number of stops has remained the same but the route has changed dramatically.

How or by whom is it being organized? There are a number of interested parties with varying degrees of power. At the forefront, the government—that is, the State of Hawaii—makes the final decision. However, the people of Hawaii directly influence their decisions.

The protection of cultural resources, practices, and beliefs is important in Hawaii, both as a matter of law and of culture. Private archeology firms, state officials, and cultural descendants work together to reduce and mitigate impacts to archaeologically significant properties. The Oahu Island Burial Council, for instance, is a state council created to help protect iwi kupuna (ancestral bones). It stresses the importance of consulting recognized lineal descendants before any excavation for the rail project is carried out.

Where is it being organized? The “where” component of the organizing system is not as important for the scope of this analysis as other design questions. However, the physical nature of the project highly constrains how the system can be organized. The volcanic origin of O’ahu, does not allow for a below-ground rail system. The limited real estate, similarly, does not allow for a ground-level system. The sharp and steep volcanic ridges that cut across the island are barriers that limit where the rail system might go.