Overview. In 1900, a strange looking mechanical device was recovered from a shipwreck off of the island of Antikythera, Greece. Only in the 1970s was it determined that the device was an ancient mechanical computer that performed astronomical calculations; it had a manual crank control with a rate of one turn per day, forward or backward in time; its user interface presented calendrical, solar, lunar, and planetary positions.1 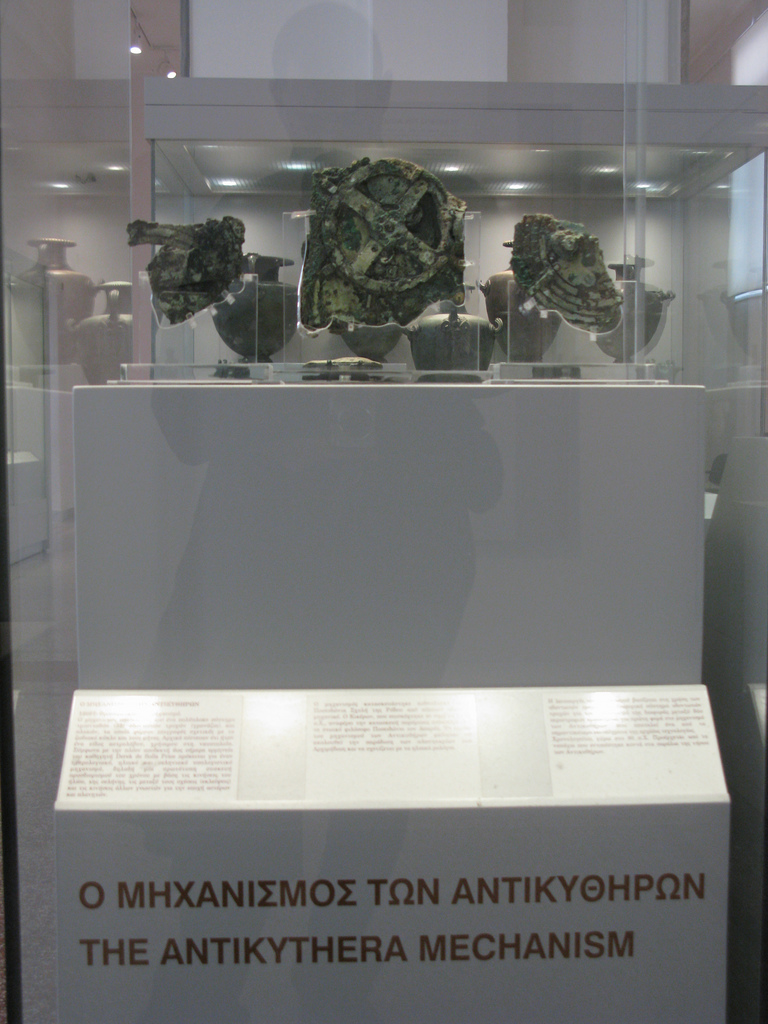 The Antikythera Mechanism exhibit at the National Archaeological Museum of Athens.

The Antikythera Mechanism persists through time as a collection of artifacts and a model of intellectual achievement. Thought to have been constructed by Archimedes at Syracuse or by Posidonius at Rhodes, the mechanism was recovered from a ship wreck near the Greek island of Antikythera in 1900-1. The significance of the find only began to become apparent in the 1970s when researchers applied modern scanning technology.2

The organization of the mechanism consists of a main solar gear connected to a hand crank and a collection of gear trains that ultimately control the rotation of pointers indicating the calendar, lunar position and phases, the position of the sun and of all the known planets, and the nearest eclipse. The mechanism was housed in a wood frame box with bronze panels whose physicality was obviously intrinsic to the use of the device; the panels the back door was inscribed with what seems to be a user’s guide.

The Antikythera Mechanism calculated the position of the moon by employing five gear trains to take into account the Saros, Metonic, Callipic, and Exeligmos cycles. Thus, it was able to predict the dates of solar and lunar eclipses.

Today, the Antikythera is a collection of the eighty-two fragments that have been recovered from the ship wreck and sea bed, twenty three of which are evidently inscribed. The fragments have been dated to about 70 BCE based on the coincident presence of some coins from Pergamum and Ephesus that were recovered in the 1970s.

Why is it being organized? From a purely pragmatic perspective, the Antikythera Mechanism was a relatively portable computational device. that would have been used to accurately reckon a very specific calendar system, and to predict the cycles of days, months, years, and saro, as well as lunations, eclipses, and Olympic games. It would be an invaluable tool for astronomers, mathematicians, civil engineers, and cartographers of the time.

From a philosophical perspective, the Antikythera Mechanism was built to prove that it could be done. It represents a fulfillment of Aristotelian thought. Through the ages, the lure of scientific answers to the mathematical riddles presented among the patterns in the heavens has challenged our burgeoning intellects. The Antikythera Mechanism realized then-modern thinking on mathematics, engineering, astronomy and calendrical calculation in a portable mechanical computational device.4

How much is it being organized? Some of the major fragments are on display at the National Archaeological Museum of Athens; the others are stored. 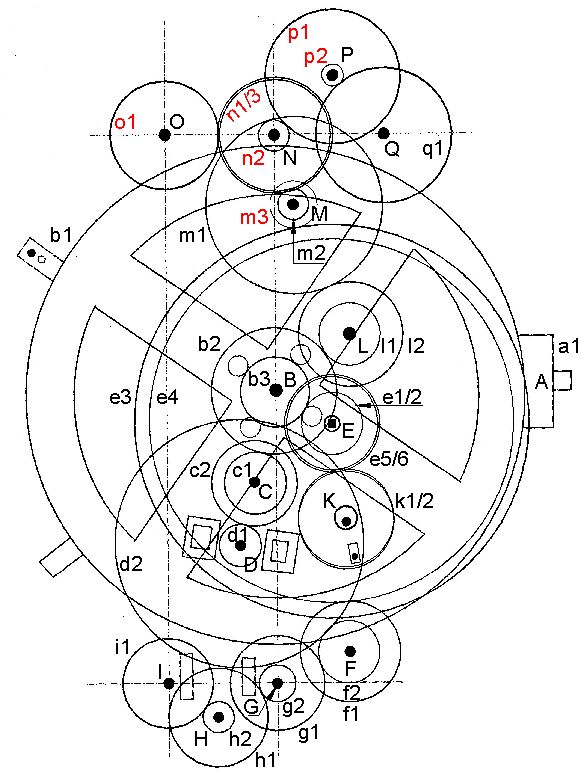 The Antikythera Mechanism is reported to have had about thirty gears within a frame whose size was less than the volume of a large book. The level of miniaturization and the precision of fabrication was not thereafter seen until the next millennium. The engineering and machining would have required trial models, accurate plans, and custom tooling. There have been various modern attempts to re-create the Antikythera Mechanism, or at least to re-create the model it seems to have manifested.5

When is it being organized? The person who operates the mechanism turns a hand-operated crank to establish a date, or contra-wise confirms the current date by taking sightings and comparing with the dial settings. The front face offers a solar-lunar calendar dial, a tropical zodiac dial, and an almanac dial with rising and setting times of various stars. The rear panel offers dials representing the five lunar cycles. 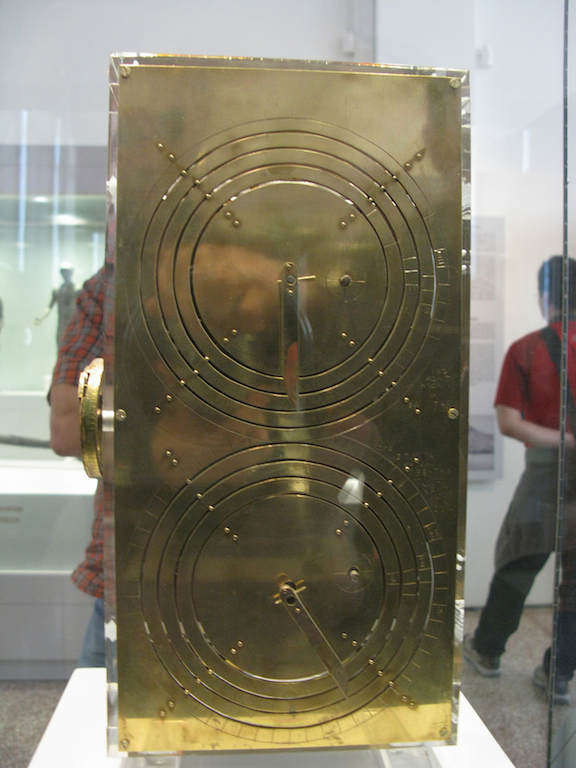 A recreation of the Antikythera Mechanism on display at the National Archaeological Museum of Athens.

The organization of the engineering data required to build, operate, and maintain the Antikythera Mechanism is staggering to imagine, yet it pales in comparison to the organization required to collect and archive astronomical sightings on clay tablets for hundreds of years.6 (See the sidebar, A Cuneiform Document at the Pergamon.)

The organization of the fragments of the Antikythera Mechanism is in the hands of the Bronze Collection of the National Archeological Museum in Athens.

How or by whom is it being organized? Ancient Chaldean, Greek, and Roman astronomers and engineers; modern divers, marine archaeologists, curators and researchers. In 1978, Jacques Cousteau led an expedition to the sea bed and returned some historical artifacts, that, while unrelated to the Antikythera Mechanism itself, provide additional historical context and may help date the discovery.

Other considerations. From the perspective of one ship’s unlucky captain and crew, the Antikythera Mechanism was likely just a piece of cargo, although it may have accompanied an equally unlucky passenger carrying the world’s first computer to Caesar’s court in Rome. It remains unknown how or why the device was aboard the ship or what fate befell it, but that is a story for researchers and historians to uncover in the fulness of time.

Notes: The following notes relate to this case study.