Overview. The Mumbai dabbawala tiffin service is the source of much fascination from around the world, and I am no different: I worked in Mumbai for two years and used the services of dabbawalas to get my lunch box (called a “dabba”) delivered from home to my office, which was about 44 miles away. Without the use of any technology or digital resources, this organizing system has been coordinating the delivery of home-cooked lunches to thousands of Indian office workers for over a century, charging just a small fee of $3-7 per month. The community of dabbawalas has been able to create value for its customers by optimizing and standardizing the principles of its operations and devising an organizing system that is down to earth and human-centric.

What is being organized? The primary resources in the dabbawala system are the dabbas that are delivered to respective customer’s offices and organized using a simple but effective color-coding system. The secondary resource is the workforce, consisting of 5,000–6,000 people known as dabbawalas, who organize themselves and their supporting supply chain and logistics operations to deliver the dabbas to the right location and at the right time each day without failure. The dabbawala community, called the Mumbai Tiffin Box Suppliers Association (MTBSA), follows a flat organization structure, meaning the motivation to perform consistently is a matter of personal drive and accountability.

Why is it being organized? The primary reason people use the service of the dabbawalas is to eat a proper, home-prepared meal during lunch, a way to connect with their family while busy at work. The interactions supported by the dabbawala organizing system provide two significant benefits to the customers: managing their budgets while eating healthy, and leveraging time constraints. Most of the office-goers usually leave by 7 a.m. to commute from the suburbs of Mumbai, traveling south to the main commercial area of Mumbai and returning back home after 7 p.m. The railway network during the peak hours is jam-packed with commuters hanging onto the trains with one hand; therefore, carrying one’s lunch at that time is not feasible. Most of the commuters cannot afford to eat takeout every day, and eating on the roadside is unhealthy and unhygienic. In addition, catering to the diverse food habits and taste needs of employees is very difficult for office canteens to manage. Thankfully, the dabbawala system solves all these problems with 100 percent customer satisfaction by delivering to each employee his lunch filled with food prepared at his home.

How much is it being organized? The Mumbai lunch box system is a successful and a socially sustainable enterprise. The number of dabbas delivered per day to offices and back home is around 300,000; that means 600,000 transactions per day. Although the number of transactions is very large, each person handles a small subset of transactions at a time. The scope of the organizing system and the scale of operations pretty much remain consistent, with the addition or deletion of few dabbas every month. Most interestingly, despite the lack of computers, mobile technology, or any automated processes, a dabba goes astray only once every two months, making less than one mistake in every 6 million deliveries. Now that’s efficiency! The system is able to achieve consistency in its operations because of successful implementation of several organizing principles. Firstly, containers used to house the lunch boxes are of a standard shape and size. Second, the color coding done on the dabbas takes advantage of people’s visual acuity, following a human-centric design approach. Third, the sequence of transactions to deliver each dabba from its source to destination and back to source is repeatable, predictable, systematic, and iterative in nature, enabling easy tracking and monitoring. Finally, governance within the community is achieved by instilling ethics, values, and principles in employees and by holding employees accountable at all times.

When is it being organized? The interactions between dabbawalas to deliver the dabbas follow a “hub and spoke” process model. During a dabba’s journey from kitchen to consumer, it is handled by between three and twelve different deliverymen. The typical day for a dabbawala begins at 9:30 a.m., and he spends about an hour collecting all the 25–30 dabbas from the assigned set of homes in his designated area. The households are expected to have the lunch box ready when he arrives for collection. When he is done with collection, he goes to the local train station and gathers with the other dabbawalas of his area. Next, the dabbas are sorted in the order of stops on that rail line and handed off to the dabbawala who is responsible for that particular station for delivery to their final destination. At every departure station, the dabbas are passed out according to their next destinations. The same process is repeated when returning empty dabbas back to homes. 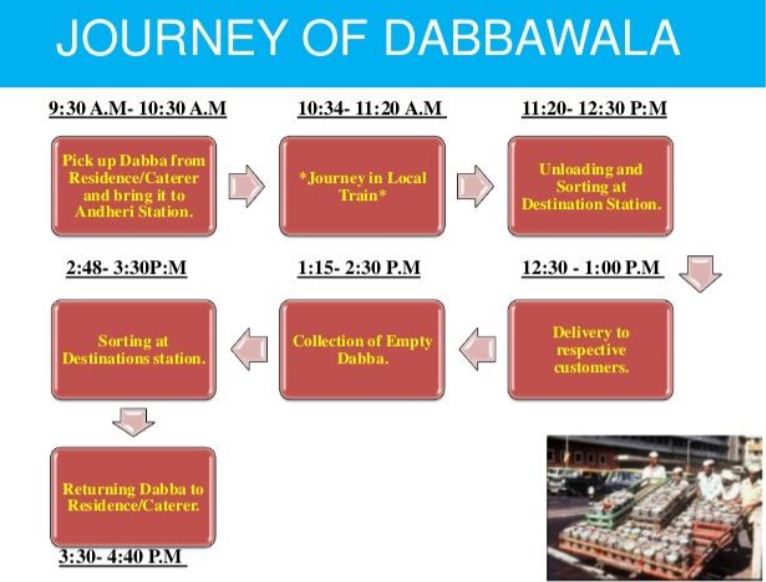 A model of the dabbawalla delivery process

How or by whom is it being organized? The key to this successful delivery management system is the color coding done on the dabbas. The dabbawalas use simple design measures such as signs, different colors, numbers, dashes, dots, letters, and simple symbols to indicate various parameters such as origination suburb, route to take, destination station, who is responsible, the street, building, floor, etc. As most of the dabbawals are illiterate, the choice of syntax for markings is done in such a way to ensure it is easy to understand and implement. The vocabulary used to implement and describe markings on the dabbas follows a standardized and self-descriptive process, thereby eliminating ambiguity and variability and making the organizing system more effective. Since only numbers and letters are used, the syntax for description of the primary resource (dabbas) is intentionally made to be independent of any local language, so that everyone can learn, understand, and process without any confusion, bias, or information overload. 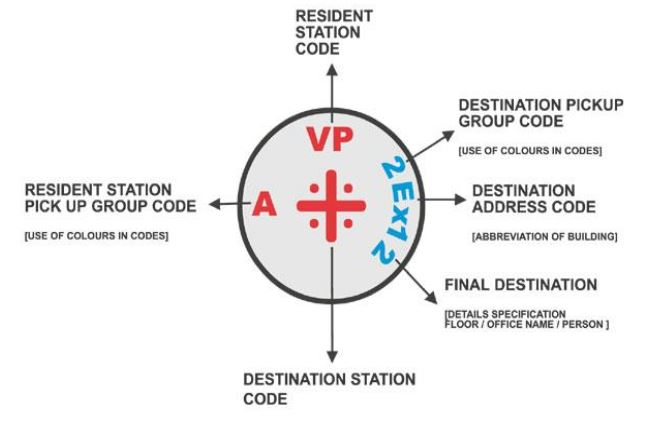 A breakdown of the coding system used to identify and route a dabba.

At each stage of the process, only one part of this code needs to be read, which works as a signal and thus allows picking up the right dabbas very quickly. It is also particularly efficient for traceability, since any dabbawala seeing a dabba knows which path it has to take. In case a dabba is lost or forbidden somewhere, any dabbawala is able to put it back on the right track. There is no need for the structure of color coding to be more granular than described above, as dabbawalas know the collection areas by heart. Furthermore, the process of adding a new resource to the organizing system is straightforward and structured. If a new resource—that is, a new customer—is added to the system, the dabbawala will do the complete journey to check the address of delivery and coordinate with other colleagues in the community to see who has a free place in his crate to add one more dabba. Once the sequence of delivery has been established and all the necessary stops for exchange decided, the address on the dabba is marked and it becomes part of the whole system.

Other considerations. It would be interesting to know if this delivery model could be used by other cities as the problem of longer commute and need for homemade food for lunch by office workers is always there in major cities. In my view, standardization of operations and understanding cultural and regional biases can provide opportunities for other cities to implement this model, at the same time providing jobs to many semi-skilled workforces.