Overview. Just about everyone has a kitchen in their home or apartment, and most kitchens contain many of the same resources. These include pots and pans, dishes, bowls, drinking glasses, silverware, and cooking tools of various kinds. Kitchens are also often the location for organizing food items, cooking ingredients, spices, wine, and other beverages. Kitchens also invariably contain refrigerators and freezers for storing prepared and preserved food.

The organizing system for a kitchen is highly influenced by the size, shape, and arrangement of the counters, cabinets, shelves, and other parts of the physical environment of the kitchen. A person building a new home might be able to design this kitchen environment, but most people treat this as a given and work within its affordances, often because there are limits to how much the physical environment can be easily changed. 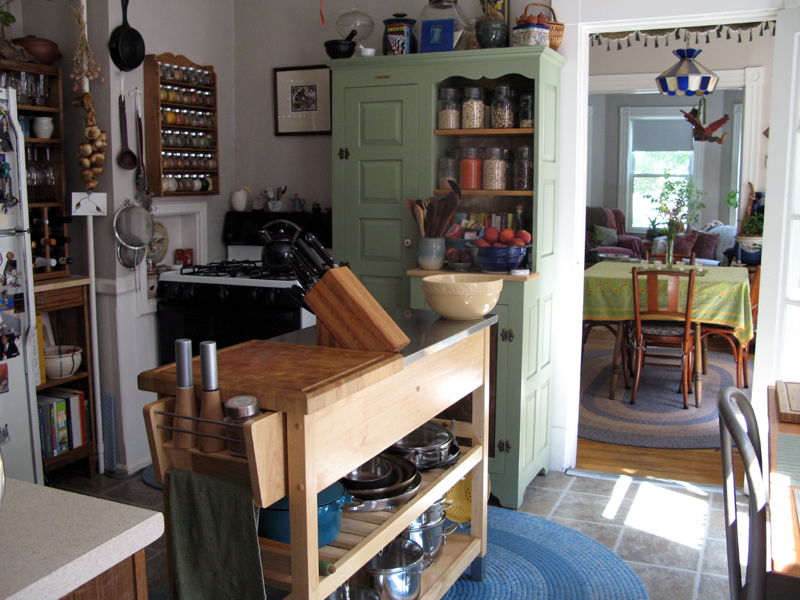 My kitchen. I did my annual deep kitchen clean and it deserved a picture.

What is being organized? Our wine, wine glasses, cocktail glasses and ingredients, as well as tea and coffee stuff were stored in the cabinet by the fridge, close to the center worktable so people could have easy access to them. Because of space limitations, this meant that our water glasses had to be somewhere else, but as we would usually put out water for dinner parties or have a pitcher and glasses on a tray when people came over, we thought this was reasonable, since the things people would most often be looking for and need easy access to for themselves would be these more social drinking glasses.

We also bought a freestanding worktable with a butcher’s block and stainless steel for pastry and chocolate work, as well as extra counter space in general. It worked as a prep space and as an area to lay out finished dishes or drinks for people to serve themselves when we had parties.

Some kitchen tools were kept with the food items to which they applied: for example, the coffee and the coffee grinder, or the cutting board, toaster, bread knife and bread all together. Other tools were kept with like tools: potato peelers, julienne tools, knives, etc. This was probably because of the kind of flexibility something like a potato peeler would have versus a coffee grinder; it also made more sense to put lots of these little things together in a drawer rather than leave them strewn out around the apples or potatoes.

Pots and pans had their own spaces and were stacked within one another; same with dishes. Most frequently used things were given preference over specialty tools.

Other things that were organized around the social dimensions of the kitchen were some food items and serving elements. For example, we used bowls to organize chocolate bars and treats that might easily be grabbed to set out and serve. Similarly, we kept stacks of serving bowls easily at hand so we could empty pretzels or tortilla chips, olives, etc., quickly and casually.

Why is it being organized? We wanted to emphasize a feeling of comfort and openness in our kitchen, so people would feel free to get what they wanted when they needed it. It also had to work on a practical level to be an efficient work area in a small space, so those concerns had to be balanced as well.

When is it being organized? We ended up moving silverware at one point because friends would consistently open a particular drawer in our center work island to look for silverware. Initially, I had specialized tools in that drawer because they were what I would reach for when I was working on something like making chocolates, but because of the continuous confusion, we moved those tools to another drawer and put the silverware where people seemed to expect it.

The fridge and freezer was organized by type of food for orderliness, ease of access, and immediacy of knowing when we had. We have a pull-out freezer, so things could get a little hidden, but assuming no one had compromised the system, you would know it was frozen fruit all of the way down in one segment and flours in another.

Some food items demanded different placement or storage based on their ripeness, the season, etc. In August we might be overrun with tomatoes, for example, and the window sills would fill up with them, whereas we would usually put them in a bowl if there were just a few.

How or by whom is it being organized? I think one thing to sum up would be to say that my partner is a librarian and I am trained as an archivist. We both care about classification and public service, so as people who also entertain a lot, I think these very practical and intuitive systems of grouping things is a motivation.

My father, an engineer who in his retirement does a lot of woodworking, built two cabinets that would just fit into the space and provide more storage than the two upper cabinets and three base cabinets provided in the kitchen.

Other considerations. The whole kitchen was not organized around guests, though. We also arranged things to be practical for cooking and for space saving. Food in the cabinets was organized by general function: for example, there was a shelf of dried beans in jars, another of dried chilies and spices—things that give flavor. Spices were organized within that by general type in rows and then alphabetically within those rows. This was because the rows helped group things which might be likely used together (e.g., cinnamon, cloves, mace, nutmeg) and alphabetically because so many of them look the same from the outside; knowing that the oregano would necessarily be shelved before the thyme was useful. Beans, though, because they are more immediately identifiable, less used, and certainly not as often used in concert (as one would with spices), I was a little more loose with and sometimes just arranged to a general aesthetic preference; if we had heirloom money beans, I might have preferred to see them over the standard red lentils, for example.