3 The Concept of “Resource”

Resource has specialized meaning in Internet architecture. It is conventional to describe web pages, images, videos, and so on as resources, and the protocol for accessing them, Hypertext Transfer Protocol(HTTP), uses the Uniform Resource Identifier(URI).[1] 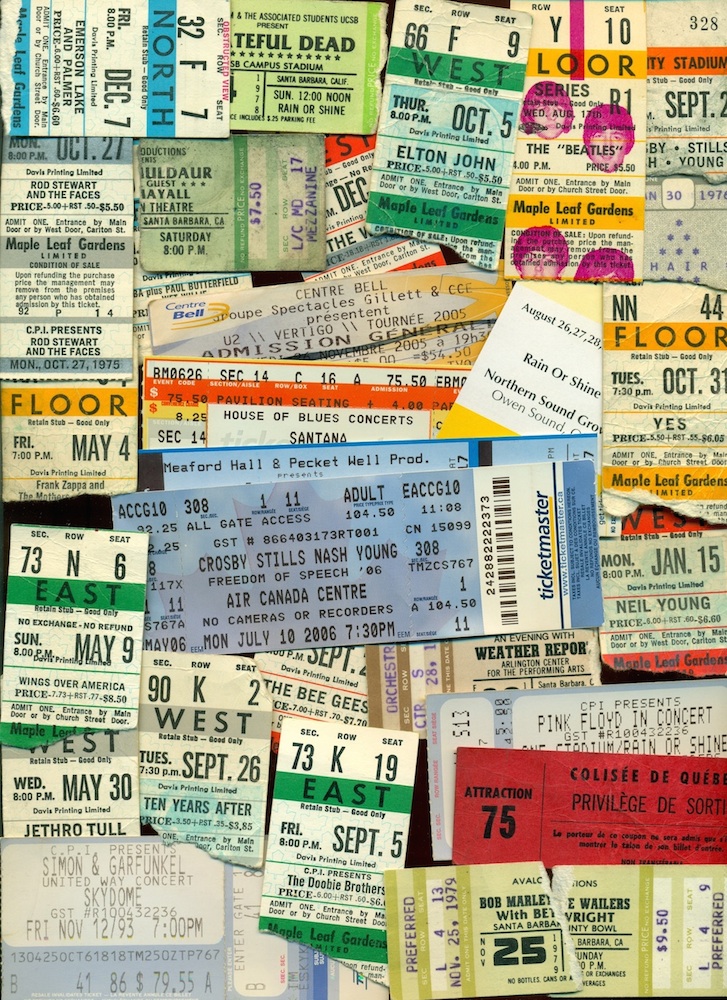 Tickets are physical artifacts that convey event-related metadata: including time, place, and seat number; price and terms of admission; and featured performers. For concert goers, tickets offer the promise of all that, and a memory of the ineffable quality of more.

What IS a Concert Ticket?

A concert ticket is a vehicle for conveying a package of assertions about an event, so it is a description resource, like a card in a library card catalog. A concert ticket is also a resource in its own right, with intrinsic value; it can be bought and sold, sometimes for a greater price than its resource description specifies. A ticket is a license to use a seat in a venue for a specified purpose at a specified time; after the event, the ticket loses its intrinsic value, but might acquire extrinsic value as an artifact in a collection like this one.

Treating as a primary resource anything that can be identified is an important generalization of the concept because it enables web-based services, data feeds, objects with RFID tags, sensors or other smart devices, or computational agents to be part of Organizing Systems.

Instead of emphasizing the differences between tangible and intangible resources, we consider it essential to determine whether the tangible resource has information content—whether it needs to be treated as being “about” or representing some other resource rather than being treated as a thing in itself. Whether a book is printed or digital, we focus on its information content, what it is about; its tangible properties become secondary. In contrast, the hangars in our closet and the measuring cups in our kitchen are not about anything more than their obvious utilitarian features, which makes their tangible properties most important. (Of course, there is no sharp boundary here; you can buy “fashion hangers” that make a style statement, and the old measuring cup could be a family memento because it belonged to Grandma).

Many of the resources in Organizing Systems are description resources or surrogate resources that describe the primary resources; library catalog entries or the list of results in web search engines are familiar examples. In museums, information about the production, discovery, or history of ownership of a resource can be more important than the resource; a few shards of pottery are of little value without these associated information resources. Similarly, business or scientific data often cannot be understood or analyzed without additional information about the manner in which they were collected. Most web-based businesses exploit data about how users interact with resources, such as the log files that record every web search you make, every link you click, and every web page you visit.

Resources that describe, or are associated with other resources are sometimes called metadata. However, when we look more broadly at Organizing Systems, it is often difficult to distinguish between the resource being described and any description of it or associated with it. One challenge is that when descriptions are embedded in resources, as metadata often is—in the title page of a book, the masthead of a newspaper, or the source of web pages—deciding which resources are primary is often arbitrary.

A second challenge is that what serves as metadata for one person or process can function as a primary resource or data for another one. Rather than being an inherent distinction, the difference between primary and associated resources is often just a decision about which resource we are focusing on in some situation. An animal specimen in a natural history museum might be a primary resource for museum visitors and scientists interested in anatomy, but information about where the specimen was collected is the primary resource for scientists interested in ecology or migration.

Organizing Systems can refer to people as resources, and we often use that term to avoid specifying the gender or specific role of an employee or worker, as in the management concept of the “human resources” department in a workplace. A business is defined by its intentional arrangement of human resources, and there is both variety and regularity in these arrangements (see the sidebar, Business Structures in “The Structural Perspective”). [2]

Human resources in Organizing Systems can be understood much the same way as inanimate physical or digital resources: they are selected, organized, and managed, and can create value individually or through their interactions with others inside and outside of the system.[3]

However, human beings are uniquely complicated resources, and any Organizing System that uses them must take into account their rights, motivations, and relationships. (See the sidebar, People as Resources.)