We can express the relationship between Homer and Marge Simpson using a predicate(argument(s)) syntax as follows:

The sequence, type, and role of the arguments are an essential part of the relationship expression. The sequence and role are explicitly distinguished when predicates that take two arguments are expressed using a subject-predicate-object syntax that is often called a triple because of its three parts:

We can be more rigorous and define the words used in these expressions so they are “in the world” rather than just “in the mind” of the person understanding them. We can write definitions about these resource classes:

Definitions like these help a person learn and make some sense of the relationship expressions involving Homer and Marge. However, these definitions are not in a form that would enable someone to completely understand the Homer and Marge expressions; they rely on other undefined terms (consensual, law, lifetime, etc.), and they do not state the relationships among the concepts in the definitions.[4] Furthermore, for a computer to understand the expressions, it needs a computer-processable representation of the relationships among words and meanings that makes every important semantic assumption and property precise and explicit. We will see what this takes starting in the next section.

In this discussion we will use entity type, class, concept, and resource type as synonyms. Entity type and class are conventional terms in data modeling and database design, concept is the conventional term in computational or cognitive modeling, and we use resource type when we discuss organizing systems. Similarly, we will use entity occurrence, instance, and resource instance when we refer to one thing rather than to a class or type of them.

There is no real consensus on how to categorize semantic relationships, but these three broad categories are reasonable for our purposes:

One entity type contains or is comprised of other entity types; often expressed using “is-a,” “is-a-type-of,” “is-part-of,” or “is-in” predicates.

Asserting or assigning values to properties; the predicate depends on the property: “is-the-author-of,” “is-married-to,” “is-employed-by,” etc.

Asserting ownership or control of a resource; often expressed using a “has” predicate, such as “has-serial-number-plate.”[5]

There are three different types of inclusion relationships: class inclusion, meronymic inclusion, and topological inclusion. All three are commonly used in organizing systems.

Class inclusion is the fundamental and familiar “is-a,” “is-a-type-of,” or “subset” relationship between two entity types or classes where one is contained in and thus more specific than the other more generic one.

A set of interconnected class inclusion relationships creates a hierarchy, which is often called a taxonomy.

A visual depiction of the taxonomy makes the class hierarchy easier to perceive. See Figure: A Partial Taxonomy of Food. 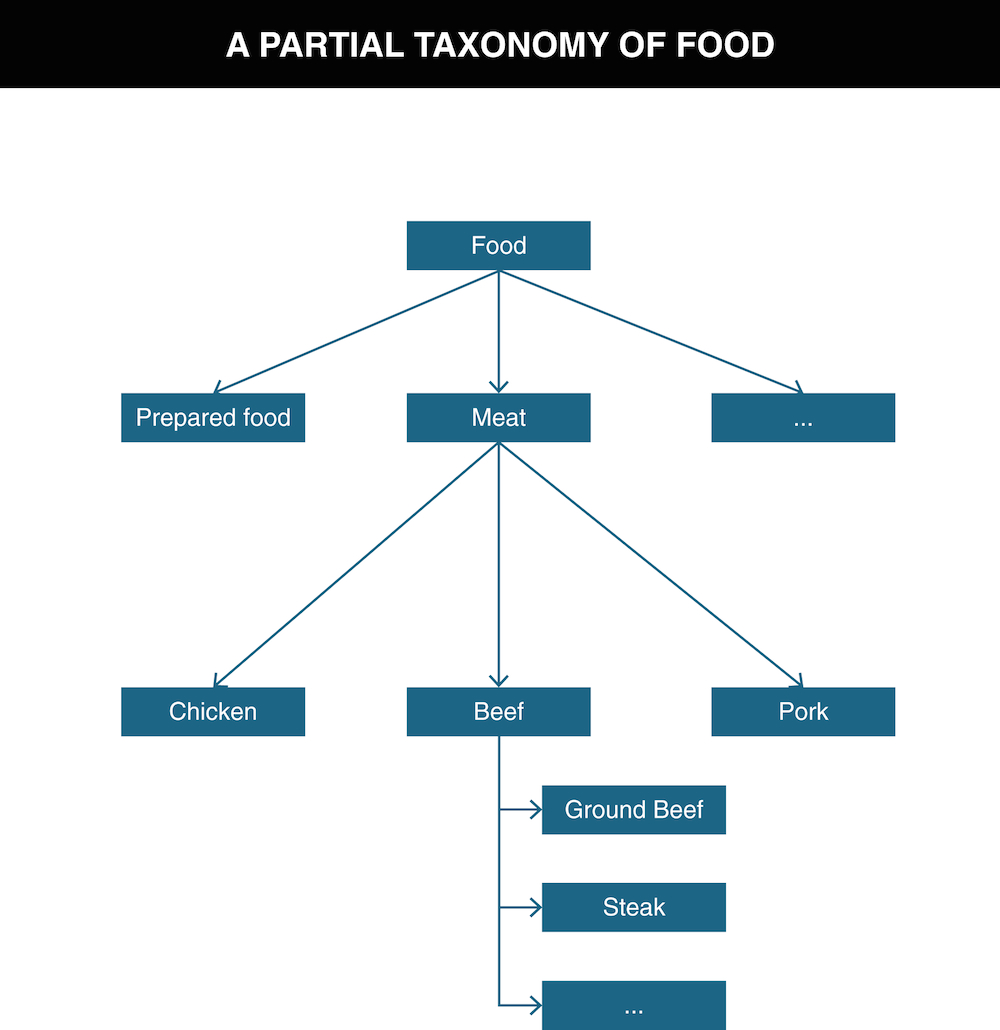 Each level in a taxonomy subdivides the class above it into sub-classes, and each sub-class is further subdivided until the differences that remain among the members of each class no longer matter for the interactions the organizing system needs to support. We discuss the design of hierarchical organizing systems in “Principles for Creating Categories”, “Principles for Creating Categories.”

All of the examples in the current section have expressed abstract relationships between classes, in contrast to the earlier concrete ones about Homer and Marge, which expressed relationships between specific people. Homer and Marge are instances of classes like “married people,” “husbands,” and “wives.” When we make an assertion that a particular instance is a member of class, we are classifying the instance. Classification is a class inclusion relationship between an instance and a class, rather than between two classes. (We discuss Classification in detail in Classification: Assigning Resources to Categories.)

This is just the lowest level of the class hierarchy in which Homer is located at the very bottom; he is also a man, a human being, and a living organism (in cartoon land, at least).[6] You might now remember the bibliographic class inclusion hierarchy we discussed in “Identity and Bibliographic Resources”; a specific physical item like your dog-eared copy of Macbeth is also a particular manifestation in some format or genre, and this expression is one of many for the abstract work.

Part-whole inclusion or meronymic inclusion is a second type of inclusion relationship. It is usually expressed using “is-part-of,” “is-partly,” or with other similar predicate expressions. Winston, Chaffin, and Herrmann identified six distinct types of part-whole relationships. Their meaning subtly differs depending on whether the part is separately identifiable and whether the part is essential to the whole.[7]

A seventh type of part-whole relationship called Phase-Activity was proposed by Storey.[8]

Topological, Locative and Temporal Inclusion is a third type of inclusion relationship between a container, area, or temporal duration and what it surrounds or contains. It is most often expressed using “is-in” as the relationship. However, the entity that is contained or surrounded is not a part of the including one, so this is not a part-whole relationship.

In contrast to inclusion expressions that state relationships between resources, attribution relationships assert or assign values to properties for a particular resource. In Resource Description and Metadata we used “attribute” to mean “an indivisible part of a resource description” and treated it as a synonym of “property.” We now need to be more precise and carefully distinguish between the type of the attribute and the value that it has. For example, the color of any object is an attribute of the object, and the value of that attribute might be “green.”

Some frameworks for semantic modeling define “attribute” very narrowly, restricting it to expressions with predicates with only one argument to assert properties of a single resource, distinguishing them from relationships between resources or resource types that require two arguments:[9]

However, it is always possible to express statements like these in ways that make them into relationships with two arguments:

Dedre Gentner notes that this supposed distinction between one-predicate attributes and two-predicate relationships depends on context.[10]

For example, small can be viewed as an attribute, X → is-small, or as a relationship between X and some standard or reference Y, X → is-smaller-than → Y.

Another somewhat tricky aspect of attribution relationships is that from a semantic perspective, there are often many different ways of expressing equivalent attribute values.

Finally, we note that we can express attribution relationships about other relationships, like the date a relationship was established. Homer and Marge Simpson’s wedding anniversary is an attribute of their “is-married-to” relationship.

The semantic distinctions between attributes and other types of relationships are not strong ones, but they can be made clearer by implementation choices. For example, XML attributes are tightly coupled to a containing element, and their literal values are limited to atomic items of information. In contrast, inclusion relationships are expressed by literal containment of one XML element by another.

A third distinct category of semantic relationships is that of possession. Possession relationships can seem superficially like part-whole ones:

However, in the second of these relationships “has” is an elliptical form of “has as a part,” expressing a part-whole relationship rather that one of possession.

The concept of possession is especially important in institutional organizing systems, where questions of ownership, control, responsibility and transfers of ownership, control, and responsibility can be fundamental parts of the interactions they support. However, possession is a complex notion, inherently connected to societal norms and conventions about property and kinship, making it messier than institutional processes might like.

Semantic relationships can have numerous special properties that help explain what they mean and especially how they relate to each other. In the following sections we briefly explain those that are most important in systems for organizing resources and resource descriptions.

In contrast, some relationships are symmetric or bi-directional, and reversing the order of the arguments of the relationship predicate does not change the meaning. As we noted earlier, these two statements are semantically equivalent because “is-married-to” is symmetric:

We can represent the symmetric and bi-directional nature of these relationships by using a double-headed arrow:

Transitive relationships enable inferences about class membership or properties, and allow organizing systems to be more efficient in how they represent them since transitivity enables implicit relationships to be made explicit only when they are needed.

We can then conclude that:

We now have described types and properties of semantic relationships in enough detail to return to the challenge we posed earlier: what information is required to fully understand relationships? This question has been asked and debated for decades and we will not pretend to answer it to any extent here. However, we can sketch out some of the basic parts of the solution.

Let us begin by recalling that a taxonomy captures a system of class inclusion relationships in some domain. But as we have seen, there are a great many kinds of relationships that are not about class inclusion. All of these other types of relationships represent knowledge about the domain that is potentially needed to understand statements about it and to make sense when more than one domain of resources or activities comes together.

For example, in the food domain whose partial taxonomy appears in Figure: A Partial Ontology of Food., we can assert relationships about properties of classes and instances, express equivalences about them, and otherwise enhance the representation of the food domain to create a complex network of relationships. In addition, the food domain intersects with food preparation, agriculture, commerce, and many other domains. We also need to express the relationships among these domains to fully understand any of them. 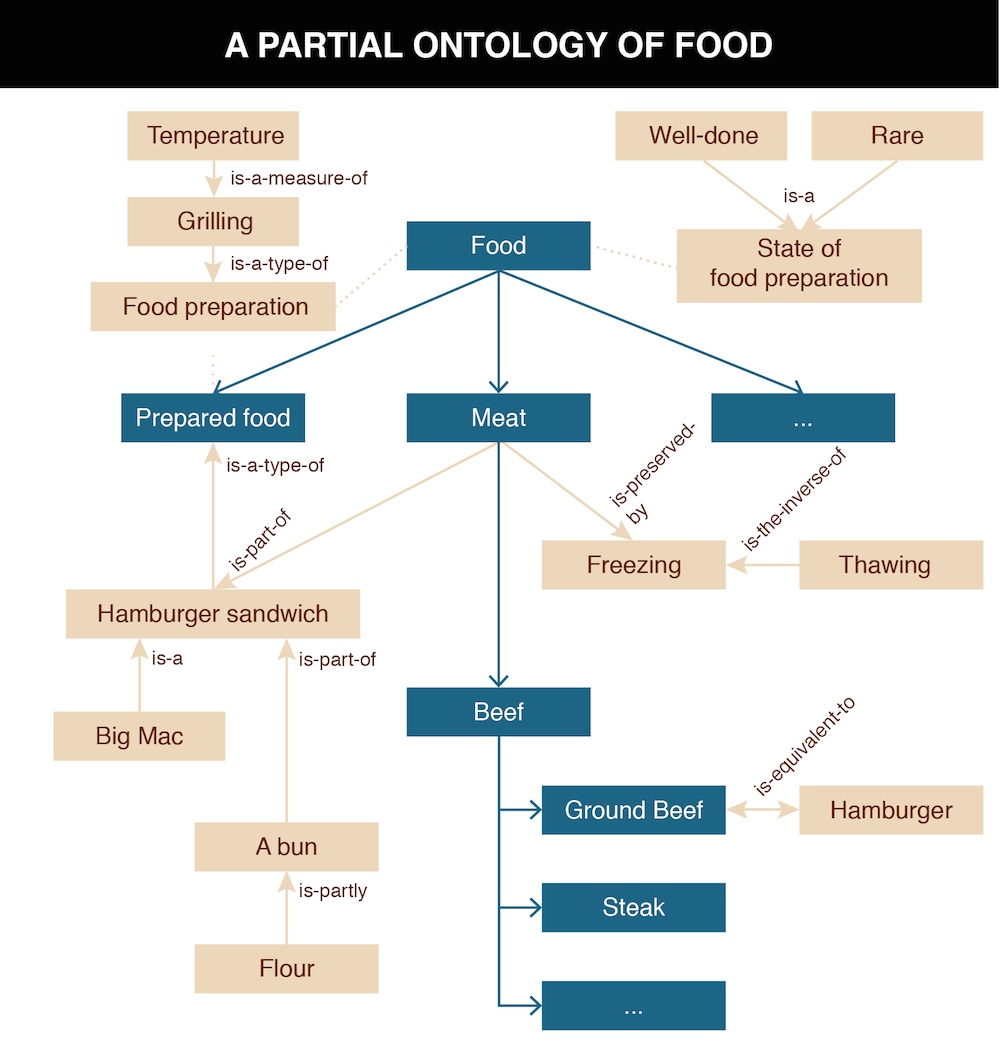 A partial ontology of food overlays the taxonomy of food with statements that make assertions about categories, instances, and relationships in the food domain. Example statements might be that “Grilling is a type of food preparation,” that “Meat is preserved by freezing,” and that “Hamburger is equivalent to ground beef.”

In this simple example we see that class inclusion relationships form a kind of backbone to which other kinds of relationships attach. We also see that there are many potentially relevant assertions that together represent the knowledge that just about everyone knows about food and related domains. A network of relationships like these creates a resource that is called an ontology.[13] A visual depiction of the ontology illustrates this idea that it has a taxonomy as its conceptual scaffold. (See Figure: A Partial Ontology of Food.)

There are numerous formats for expressing ontologies, but many of them have recently converged to or are based on the Web Ontology Language(OWL), developed by the W3C. OWL ontologies use a formal logic-based language that builds on RDF (“Resource Description Framework (RDF)”) to define resource classes and assign properties to them in rigorous ways, arrange them in a class hierarchy, establish their equivalence, and specify the properties of relationships.[14]

Ontologies are essential parts in some organizing systems, especially information-intensive ones where the scope and scale of the resources require an extensive and controlled description vocabulary. (See “The Process of Describing Resources”.) The most extensive ontology ever created is Cyc, born in 1984 as an artificial intelligence research project. Three decades later, the latest version of the Cyc ontology contains several hundred thousand terms and millions of assertions that interrelate them.[15]