The arrangements of resources in an Organizing System follow or embody one or more organizing principles that enable the Organizing System to achieve its purposes. Organizing principles are directives for the design or arrangement of a collection of resources that are ideally expressed in a way that does not assume any particular implementation or realization. We call this design philosophy “Architectural Thinking” (“Architectural Thinking”.) 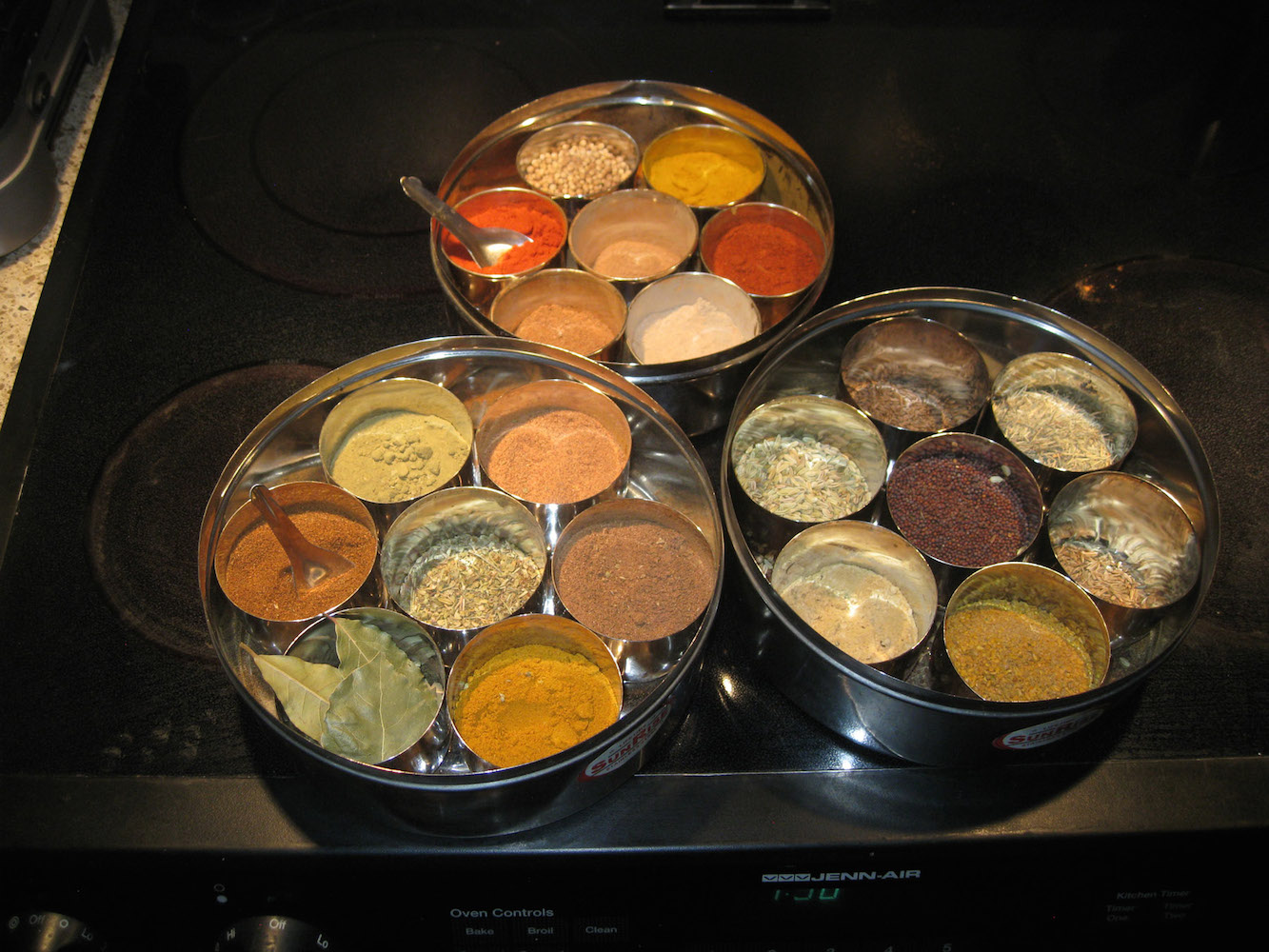 An alternative to organizing spices alphabetically is to organize them according to cuisines or flavor profiles, which can be defined in terms of ingredients and spices that tend to be used together. Patricia Glushko organizes her spices into three groups: Indian (includes cayenne pepper, coriander, cumin, turmeric), Mediterranean / Middle Eastern (includes basil, dill, oregano, paprika, thyme), and seeds. Each group of spices is in a separate large container, which makes it convenient when cooking.

When we organize a bookshelf, home office, kitchen, or the MP3 files on our music player, the resources themselves might be new and modern but many of the principles that govern their organization are those that have influenced the design of Organizing Systems for thousands of years. For example, we organize many collections of resources using the properties that are easiest to perceive, or whose values vary the most among the items in the collection, because these principles make it easy to locate a particular resource. We also group together resources that we often use together, we make resources that we use often more accessible than those we use infrequently, and we put rare or unique resources where we can protect them. Very general and abstract organizing principles are sometimes called design heuristics (e.g., “make things easier to find”). More specific and commonly used organizing principles include alphabetical ordering (arranging resources according to their names) and chronological ordering (arranging resources according to the date of their creation or other important event in the lifetime of the resource). Some organizing principles sort resources into pre-defined categories and other organizing principles rely on novel combinations of resource properties to create new categories.

Because this book was motivated by the goal of broadening the study of information organization beyond its roots in library and information science, it emphasizes organizing principles with a specific functional purpose like identifying, selecting, retrieving, or preserving resources. However, for thousands of years people have systematically collected things, information about those things, and observations of all kinds, organizing them in an effort to understand how their world works; the Babylonians created inventories and star charts; ancient Egyptians tracked the annual Nile floods; and, Mesoamericans created astronomical calendars. The term sensemaking is often used to describe this generic and less specific purpose of organizing to derive meaning from experience by fitting new events or observations into what they already know.[1]

The separation of organizing principles and their implementation is harder to recognize in an Organizing System that only contains physical resources, such as your kitchen or clothes closet, where you appear to have unmediated interactions with resources rather than accessing them through some kind of user interface or “presentation tier” that supports the principles specified in the “middle tier” and realized in the “storage tier.” As a result, people can easily get distracted by presentation-tier concerns. Too often we waste time color-coding file folders and putting labels on storage containers, when it would have better to think more carefully about the logical organization of the folder and container contents. It does not help to use colors and labels to make the logical organization more salient if that is not well designed first.

One place where you can easily appreciate these different tiers for physical resources is in the organization of spices in a kitchen. Different kitchens might all embody an alphabetic order organizing principle for arranging a collection of spices, but the exact locations and arrangement of the spices in any particular kitchen depends on the configuration of shelves and drawers, whether a spice rack or rotating tray is used, and other storage-tier considerations. Similarly, spices could be logically organized by cuisine, with Indian spices separated from Mexican spices, but this organizing principle does not imply anything about where they can be found in the kitchen.

The Three Tiers of Organizing Systems

Software architects and designers agree that it is desirable to build applications that separate the storage of data, the business logic or functions that use the data, and the user interface or presentation components through which users or other applications interact with the data. This modular architecture allows each of the three tiers to be upgraded or reimplemented independently to satisfy changed requirements or to take advantage of new technologies. An analogous distinction is that between an algorithm as a logical description of a method for solving a computational problem and its implementation in a particular programming language like Java or Python.

These architectural distinctions are equally important to librarians and information scientists. Our new way of looking at Organizing Systems emphasizes the importance of identifying the desired interactions with resources, determining which organizing principles can enable the interactions, and then deciding how to store and manage the resources according to those principles. Applying architectural thinking to Organizing Systems makes it easier to compare and contrast existing ones and design new ones. Separating the organizing principles in the “middle tier” from their implications in the “data” and “presentation” tiers often makes it possible to implement the same logical Organizing System in different environments that support the same or equivalent interactions with the resources. For example, a new requirement to support searching through a library catalog on a smart phone would only affect the presentation tier.

Figure: Presentation, Logic and Storage Tiers. illustrates the separation of the presentation, logic, and storage tiers for four different types of library Organizing Systems and for Google Books. No two of them are the same in every tier. Note how a library that uses inventory robots to manage the storage of books does not reveal this in its higher tiers. (See the sidebar, Library Robot.) 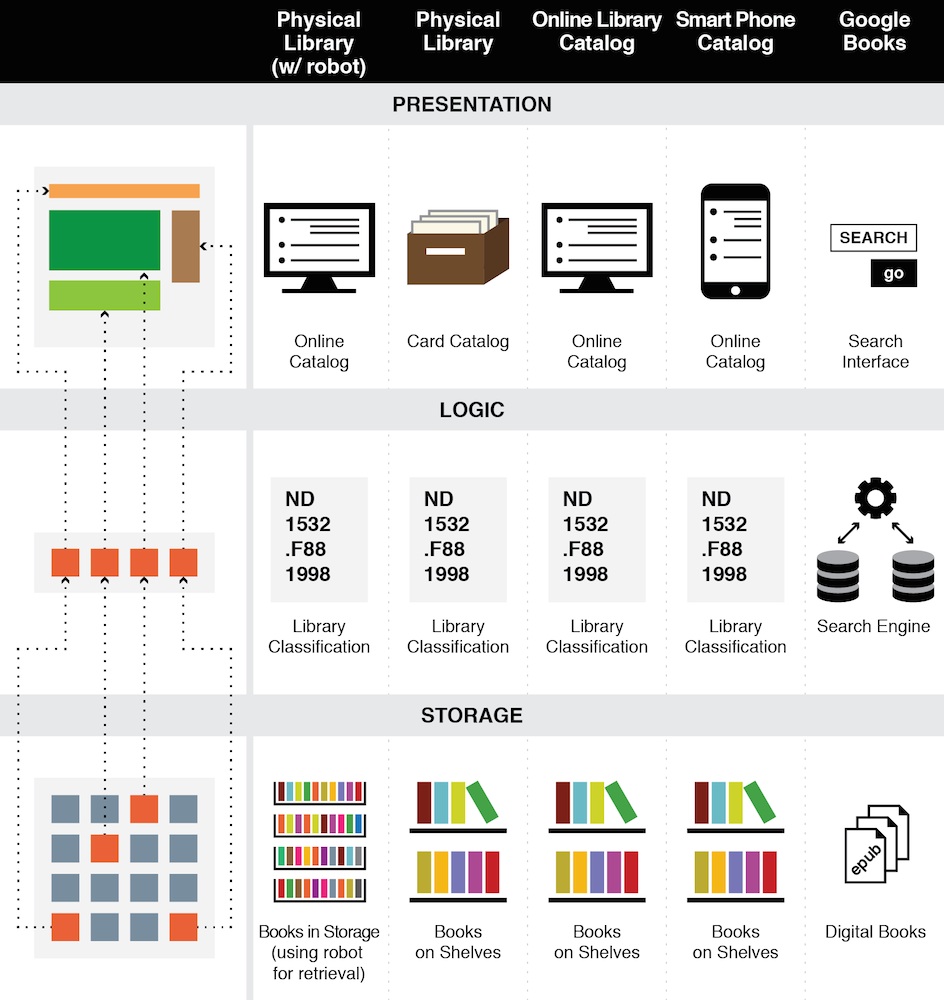 It is highly desirable when the design and implementation of an Organizing System separates the storage of the resources from the logic of their arrangement and the methods for interacting with them. This three-tier architecture is familiar to designers of computerized Organizing Systems but it is also useful to think about Organizing Systems in this way even when it involves physical resources.

Because tangible things can only be in one place at a time, many Organizing Systems, like those in the modern library with online catalogs and physical collections, resolve this constraint by creating digital proxies or surrogates to organize their tangible resources, or create parallel digital resources (e.g., digitized books).[2]

The implications for arranging, finding, using and reusing resources in any Organizing System directly reflect the mix of these two embodiments of information; in this way we can think of the modern library as a digital Organizing System that primarily relies on digital resources to organize a mixture of physical and digital ones.

The Organizing System for a small collection can sometimes use only the minimal or default organizing principle of colocation—putting all the resources in the same location: in the same container, on the same shelf, or in the same email in-box. If you do not cook much and have only a small number of spices in your kitchen, you do not need to alphabetize them because it is easy to find the one you want.[3]

Separation Of Organizing Principle
From Implementation

Whether spices are organized alphabetically by their names, by cuisines, by season, by frequency of use, or any other principle, this decision is logically distinct from the physical arrangement of the spices. There are many types of spice racks, shelves, circular “lazy susans,” and other devices designed for arranging spices.

Some organization emerges implicitly through a frequency of use principle. In your kitchen or clothes closet, the resources you use most often migrate to the front because that is the easiest place to return them after using them. But as a collection grows in size, the time to arrange, locate, and retrieve a particular resource becomes more important. The collection must be explicitly organized to make these interactions efficient, and the organization must be preserved after the interaction takes place; i.e., resources are put back in the place they were found. As a result, most Organizing Systems employ organizing principles that make use of properties of the resources being organized (e.g., name, color, shape, date of creation, semantic or biological category), and multiple properties are often used simultaneously. For example, in your kitchen you might arrange your cooking pots and pans by size and shape so you can nest them and store them compactly, but you might also arrange things by cuisine or style and separate your grilling equipment from the wok and other items you use for making Chinese food.

Unlike those for physical resources, the most useful organizing properties for information resources are those that reflect their content and meaning, and these are not directly apparent when you look at a book, document, or collection of data. Significant intellectual effort or statistical computation is necessary to reveal these properties when assigning subject terms, creating an index, or using them as input features for machine learning and data analysis programs.

The most effective Organizing Systems for information resources often are based on statistical properties that emerge from analyzing the collection as a whole. For example, the relevance of documents to a search query is higher when they contain a higher than average frequency of the query terms compared to other documents in the collection, or when they are linked to relevant documents. Likewise, algorithms for classifying email messages continuously recalculate the probability that words like “beneficiary” or “Viagra” indicate whether a message is “spam” or “not spam” in the collection of messages processed.